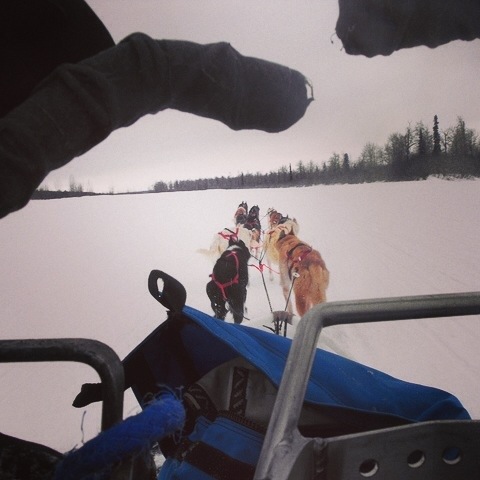 This is the team running on the Yentna River in Alaska

Hi, my name is Denali. I am one of the leaders at Team Ineka. I came from Hugh Neff’s kennel in the fall of 2011. I have been on just about every training run and race that Robert has ever done.

I am a pretty big boy at about 60 pounds. I work real well teaching the puppies the ropes and how to listen to commands like Gee and Haw that comes from way back on the sled.

I will be running on the A Team this year and in all of the races unless some younger pup takes my job and I have to sit on the bench. That’s okay though, even Tom Brady doesn’t play in EVERY game.

If you would like to learn more about me or even have me come to see you at your school or business event I would love to meet you. I am a real clown around the camera and love pets behind the ears. If you would like to sponsor me we can do that too. Your name will appear right here on MY page and you will also get a signed picture of the team, your name on our dog truck, that means lots of exposure if you are a business (hint, hint) and more!

Robert Forto, 48, grew up a military kid and lived on both the east and west coasts before attending college at Portland State University in the early 1990's … END_OF_DOCUMENT_TOKEN_TO_BE_REPLACED

On the 2017 Winter Expedition course that we taught at the University of Alaska Anchorage, we took three dog teams of 8 to 10 dogs each.  … END_OF_DOCUMENT_TOKEN_TO_BE_REPLACED

For most people when they see a dog yard they may seem quite different than what they are used doing with their own dogs. Once you look a bit closer you might find the yard is set up this way so that the dogs can foster healthy relationships and a social setting … END_OF_DOCUMENT_TOKEN_TO_BE_REPLACED

Hi my name is Skellig of the WaG Crew! I have the most unique name of all of my teammates!  Not only am I named for a type of Kerrygold cheese the cheese itself is named for the Great Skellig Island in Ireland.  I think it fits me perfectly with my strawberry … END_OF_DOCUMENT_TOKEN_TO_BE_REPLACED

Read more about our dogs