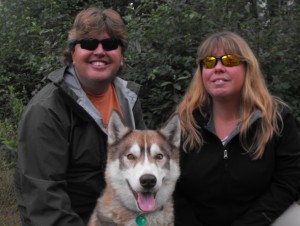 A lot of our fans and supporters always ask, what is a day like for you guys at Team Ineka? How do you fit all in?

To put it mildly, our teenage daughter has no social life (barely anyway!) and Michele and I have to sneak off and play hooky every once in a while.

Here is a typical day at Team Ineka. It changes depending on who is off work or school but it is pretty much a life with dogs.

5:30 AM: Michele and Nicole get up and take care of the house dogs and the Camp Dogs we are training either in our Camp Works program or service dogs for our business, Alaska Dog Works.

6:30 AM: Michele and Nicole get ready for work and/or school and grab a quick breakfast, usually oatmeal.

7:00 AM: Michele heads to Houston to drop off Nicole who is a junior in high school. Michele makes an hour commute to Palmer to her job as a paralegal.

7:35 AM: The sled dogs are fed. We have 36 sled dogs and it takes about 45 minutes to an hour for feeding, clean up and a quick pat on the head and a rub behind the ears.

9:00 AM: Robert heads to work in Palmer. He works 3 or 4 days a week and Tyler heads to work at Lowe’s or school. He is a freshman at Mat-Su College.

10:00 AM: Robert at work. If it is a day off for him he spends the day at home running the dogs, hosting radio shows, and/or working with the Camp Dogs.

1:00 PM: If Robert and Michele are in Palmer together they will grab lunch together and if its nice a picnic!

3:15 PM: Nicole gets home from school and spends the next couple hours working with the Camp Dogs and doing homework.

5:30 PM: Depending on who is home, training begins with the sled dogs. Most nights Robert and/or Michele have clients in Anchorage and throughout the Valley for dog training with Alaska Dog Works.

7:30 PM: Second team is on the trail and someone is either working with the Camp dogs or making dinner.

9:45 PM: Usually all of the chores are done and we finally sit down for dinner, the Camp Dogs are in their crates for the night. Nicole and Tyler are typically doing homework.

10:30 PM: Usually we will put in a movie or catch one on Netflix. We love horror movies and Robert is a huge fan of documentaries.

This goes on 7 days a week, 365 days a year. We love what we do and wouldn’t trade this life for anything. Sure we work on Christmas but it is something that we choose to do. What is the saying? If you love what you do, you will never work a day in your life.