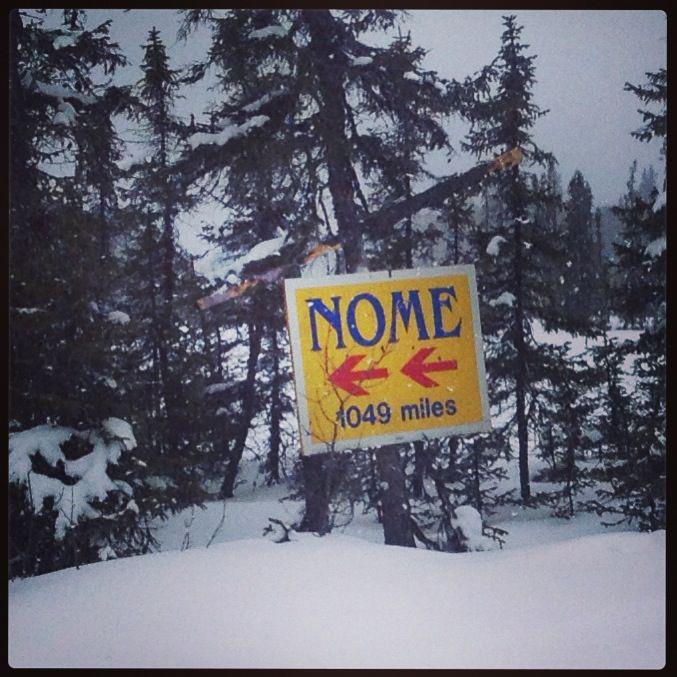 This past weekend my son Tyler and I participated in the Nome Sign 40 race. It is a 40 mile race over the original Iditarod trail to the Nome sign and back. It starts on Knik Lake in the heart of Redingtonville. There is more mushing history in the first two miles of this race than probably anywhere in the world!

This was actually Tyler’s first race ever. He was super excited to give the dogs a run when we decided to go late Saturday afternoon. We packed up the gear in a hurry Saturday night and made our lists of the dogs that would be going. It was the first race for the Nightmare Crew pups as well as some others too.

The teams (This is the first race for dogs with an *):

We were on the road early Sunday morning for the hour drive to Knik. The roads were terrible, it has snowed almost two feet in the last 24 hours. We had 22 dogs loaded up. All of the spots in the dog box were doubled, we had two in the cab in my truck, two in the cab of the Ranger and four in crates. We need a bigger dog truck!

About 10 miles in I realized I forgot my beaver hat and Tyler calls from the other truck and says we forgot the snacks for the dogs! Rather than turn around we stopped at 3-Bears and bought the hamburger patties again. No the optimum trail snack for the dogs but the seem to work.

When we arrived at Knik Lake there were just two other mushers there, one was my friend Karen Cline who I met on the Serum Run Boot Camp last year.

We had about an hour and a half before race time and several other mushers arrived pretty quickly.

Our musher meeting consisted of paying the 50 dollar entry fee and drawing our starting order from a coffee can as the race organizers came around to our trucks. Pretty informal.

There was only six teams in the 40 mile race and several others in a ten miler-six dog class. I drew bib 2, Tyler number 4. We would be going out four minutes apart.

Our friends and sponsors of the teams, Kim and Dale came out to help out and see us off. They were a huge help in getting us to the starting line (we actually ran off right from our trucks). In usual fashion I was yelling hurry up from the back of the sled as the “handlers” scurried to get all of the dogs on the line before the last second. And I was off!

The race left the lake and winded through Redingtonville and past the Dog Mushers Hall of Fame before hitting 7 mile lake. Just about 5 miles into the race, Rasp, one of my best swing dogs quit on me. She laid down right on the line and wouldnt get back up. I quickly set the hook and couldn’t find anything wrong with her so I put her in the bag of my new sled from Sled Dog Systems and dropped the 50 pounds of weight I was carrying on the side of the trail.

I travelled with Rasp in the bag for about an hour as teams passed us and we passed them. I think Karen and I passed each other three or four times.

We ran up and down the rolling hills and I made it a point to let the dogs work up each one. I wanted them to learn that hills mean to continue to pull. The trails were awesome with the snow falling and not too cold. It was a perfect day for mushing.

About 15 miles in Rasp was anxious to get out of the bag and I put her back in the team. I don’t know what happened to her back there but I am thinking that she had a stinger or something, sort of like when you lay on your arm and it goes to sleep.

As we approached the halfway point the other four mushers passed me going the other way. I knew I was getting close when Karen said, “the turn around is just up there.”

Sure enough there was the Nome Sign. The nome sign is a piece of mushing history that has been there since the early days. It points towards Nome (of course) along with a symbolic 1049 miles.

About a mile heading back towards the finish I passed Tyler and let him know the turn around was coming up. His team looked good and he was in good spirits.

We mushed on for a few hours by ourselves occasionally seeing Karen in the distance.

At about 7 Mile Lake Tyler caught up to me. He was running Sidney in single lead! We decided to mush in together. It was fun talking to him on the trail and enjoying each other as we headed toward the finish.

We arrived at the finish line at 4:42. Five hours, 38 minutes after I left. Everyone else was in and up at the Knik Bar except for Karen who (I believe) was resting in her truck.

Michele overheard one of the mushers say as they came onto the lake on a snow machine, “I have ran every race with those guys and they come in last every time. It is like they don’t train their dogs to run.”

I am very pleased with our run. We knew we weren’t going to break any records. It was Tyler’s first race ever and we had eight dogs that I had never experienced this, ever!

All of our dogs came in with their tails waggin’ and were happy. No dog was pushed too hard. We finished with all the dogs, including all of the Nightmare Crew, in the team and “smiling” as we gave them a snack at the truck.

I learned a long time ago that mushing is not about winning or losing. It is about spending time out in the woods with your dogs. It is about the bond you have built over countless miles on the trails with the team and knowing what to look out for on the trail. It is a sad day when mushing as turned into; I have to be first no matter what, or I have to win because I have to be in the “money.”

If mushing is that way for some, I am sorry. That is not what Team Ineka is about. We are a family kennel with dogs that we love and care about. Sure we have several dogs from other kennels that make up our teams but for us it is about raising our two litters–The Nightmare Crew and the 9-11 Crew–to get out on the trails and have fun with every one in the family taking part. That is what mushing is about, at least for us.