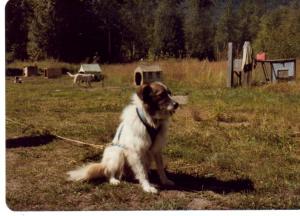 This is an exerpt from the chapter “Cylus” from my unpublished book , tentatively titled, “Best Friends”

Cylus was my first leader, an obedience dog, intelligent, all heart, and full of bounce – we think he was a Collie/Aussie cross. Cylus was a last minute rescue from euthanasia when he was ten months old – this story took place when Cylus was four or five years old and he and I had shared many things together.

One evening, my wife Carol was putting our kids to bed, and I was playing with Cylus in the living room. I was getting ready to have him do some of his tricks, but he wasn’t waiting for me to give the command. He would do the trick as soon as the idea entered my head. I stopped and wrote down a series of tricks that Cylus knew. I called Carol to come and see what was going on. I asked her to watch to see if I was unconsciously giving  any signals by my body language. I silently read the first trick on the list. Cylus did the trick. We went through the whole list. Cylus did each trick in the order that I silently read them . I was not aware of giving any signal at all, and Carol could see no motion on my part. It was so eerie, that it sent shivers up our spines…

While driving home from work one evening I hit a deer on the highway. I wasn’t hurt, but the deer was dead and the truck was not drivable. I was able to catch a ride home with the next following vehicle. I arrived home to find that some friends had come to visit. Everybody was sitting around the living room having a pleasant conversation. Cylus was on the floor beside Carol. I sat in my usual chair and listened for a few minutes to catch on to what the conversation was about. When I did start to say something, I didn’t have more than two words out of my mouth, when Cylus started to moan and wail. He crawled towards me, belly down on the floor, this horrible moaning/wailing sound coming from deep in his throat. Carol asked, “What on earth is the matter with that dog?” I replied  that I had hit a deer on the way home.

I didn’t think I felt particularly stressed, and I sure wasn’t hurt. But Cylus had picked up something in my voice and had reacted with a huge concern for my well being.

In my very first race, Cylus in single lead, at the crest of a hill, I couldn’t see where the trail went. Cylus, who was about thirty feet in front of me, facing away, felt my uncertainty. His head and his ears came up, he hesitated and slowed for a moment until I could see where the trail went. Immediately that I was confident that we were on the right track, his ears and his head went down and he was back to full speed ahead –

These are just a few examples of how that remarkable little dog seemed to live inside my head. Cylus lived to be 18-years old, and although he’s long gone these many years, I still miss him badly.

Do you have a remarkable story about one of your dogs? Contact us at live@dogdoctorradio.com We would love to hear from you.

Al Magaw is a musher from Salmo, BC. Al keeps a medium sized kennel of 20 – 45 alaskan huskies as well as several pet dogs of various breeds. Al has been training and racing for the last 33 years. Before becoming involved with sled dogs, Al, along with his family, kept and competed with horses for many years. Al can be reached through his website at http://www.spiritofthenorthkennels.com Al is a guest blogger for Denver Dog Works and can be reached through our website at http://www.denverdogworks.com