It’s Denali’s day! Each week we take one of our sled dogs to town to hang out with us and get them a special treat from Perfect Start coffee in Wasilla!

We have teamed up with The Perfect Start coffee shack in Wasilla and coming this Wednesday there will be an exciting announcement!

Robert is signed up for all of his Iditarod qualifiers this year. It is an exciting time at Team Ineka. We have a core team that is roaring and ready to go and several up-and-coming pups that will add depth to the team.

The namesake of our team. This is Ineka (IN-eck-A). He was one of the best sled dogs we ever had.

Mila joined us last week and will be working with the team as a leader. 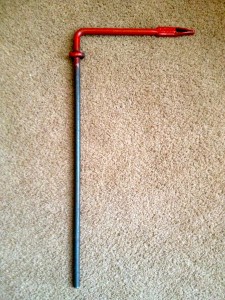 Do you want a stronger tie out for your sled dogs? These are made right here in the Mat-Su Valley in Alaska.

These steel swivels have a welded piece of steel in place of the typical washer that is super strong and will not break. An innovative steel triangle system is welded onto the end of the swivel and can accept S-hooks or D-Rings or bolts.

Can mail or you can pick up at Team Ineka in Willow.

This is a collection of photos from the 2011-2012 season at Team Ineka and Broken Runner Kennel in Willow, Alaska