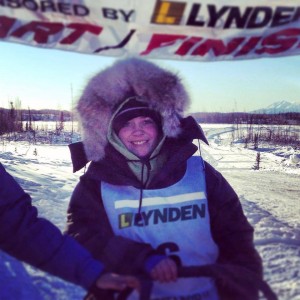 Nicole ran the Junior Iditarod in February as a rookie and finished with a team of 10 happy dogs lead by Sidney and superstar stand out, Aussie!

As Nicole’s dad and armchair musher for this race, this re-cap will be a little different than most. It does include an excellent 60 minute interview with Nicole talking about her race on The Sibe Vibe show hosted by Dorothy Wills-Raftery. You can listen to the show by clicking on the link at the bottom of this post.

Nicole started training for this race more than a year ago after she finished the Willow Junior 100 and decided that she wanted to run the biggest junior race in the world, the Junior Iditarod.

Nicole was the first musher to sign up in October and was given a generous donation by Alaska Chicks, Co. to pay for her entry free.

Lead up to the Race

As many of you know, we had a crazy winter here in Alaska. Just a little bit of snow in December then a huge warm up and a big melt in January. After I ran a few of the sprint races in late January we let the dogs have a couple weeks off to gain some weight and relax a bit as we geared up towards race day.

We waited for a couple weeks before the Junior Iditarod folks would make a formal decision on the race and the trail. Finally, about a week before they said that the race would leave from Martin Buser’s Happy Trails Kennel in Big Lake, follow through the swamps to the river past Scary Tree and up to Yentna, have the kids do a 10-hour lay over and return.

The week before the big race is always crazy! First we had to drop off Nicole’s drop bags so that they could be flown to the checkpoint at Yentna Station. Each musher was allowed two drop bags that weighed no more than 60 pounds. Each drop bag would contain everything that Nicole would need at the checkpoint and the return trip back. They included things like kibble and meat for the dogs, meat and salmon snacks, extra dog booties and batteries for Nicole’s headlamp, food for her and a few extra supplies.

On Thursday night Nicole had her rookie musher meeting at Iditarod Headquarters in Wasilla. It was very informative. Iditarod veteran Cim Smyth talking about feeding and snacking on the trail, another Iditarod veteran Zack Steer talked about dressing for cold weather, many others spoke about vet care, sled repair, the trail, and more.

On Friday morning we had to arrive before noon back at Iditarod Headquarters for the Vet Check. All the dogs looked good and passed the check except the vets told us to make sure that we gave the dogs a nail trim before the race.

Friday night was the musher meeting. Nicole, Michele and I attended and heard about all the formalities of the race and the bib draw took place. Since Nicole was the first musher to sign up she was the first to draw. She picked number 6. She would be going out in the middle of the pack.

Race day is always organized chaos. We had all of Nicoles gear and sled packed up the night before. We loaded up the team and headed over to Happy Trails by 8:00. We had to be there by 9:00. Nicole was going out 6th so we knew we had a little over two hours before her race started.

They parked us down on the lake and we got started with our pre-race chores: dropping the dogs from the truck, putting on the tags for each dog, prepping Nicole’s sled, a talk with the veterinarian, many pictures from fans, and much, much more.

As we began to hook up it was my job to lead the team out to the starting line by holding on to the leaders. Dale was near the front as was several other volunteer handlers as we made our way across the lake ice to the starting line. Michele was already there to take some pictures as they counted down to the start of Nicoles race!

Nicole and her team were off shortly after 11:15 and on the trail. The team looked good as they rounded the first turn and then she was out of sight. For us armchair mushers, the first time for me with Nicole in a big race, it was now a waiting game. The Junior Iditarod was testing out a new tracking system that would be used by the big race, the Iditarod, in a couple weeks. Each team is given two trackers, actually emergency locator beacons or SPOTS. They not only have the ability to track the teams on the trail but should the musher have an emergency they can push a button on the tracker and help would be on their way. But, if a musher pushes the button they are withdrawn from the race.

For us armchair mushers (and parents), it would become a maddening 30+ hours of constantly hitting the ‘refresh’ button on our iPhone/iPad/computer to see where Nicole was on the trail! It was so maddening that by the time I made it home from the race start, I hooked up a 10-dog team and went out on a 40 mile run. When I made it back to the house, I said, “well that took me 4 hours, Nicole should be on the river by now!”

Sure enough she was. Over the last several hours Nicole was pretty much keeping pace with the middle of the pack. As the hours wore on she fell into last place but she was keeping and even speed of about 7.8 miles an hour. The average speed of our dogs, many of them Iditarod and Yukon Quest veterans who’s speed is much more deliberate and they set themselves into a comfortable pace.

Nicole arrived to Yentna station close to 7:00 to begin her 10 hour mandatory layover. She was a couple hours behind the musher in front of her but to Nicole she didn’t mind. She started her chores and even got a few hours rest before leaving in the early morning darkness heading toward the finish. The reports from the trail said that her dogs looked great and so did she and she left without any problems.

Nicole would tell us later that she mushed along the river with the Northern Lights swirling above her. What a sight!

I woke up at 5:30 and the first thing I did was check on Nicole’s status of her tracker on my iPad. She was allowed to leave at about 4:50. I saw that she was moving down the river and went back to sleep until about 7:30. After the morning chores and meeting with a dog training client at our house, we left to head to Big Lake at about 11:30. We arrived by 12:15 and could see by the tracker that she was still several hours away. We alternated between sitting in the truck and the visitors center at Happy Trails to get updates on Nicole.

When she was five miles out we all started getting anxious and headed out to the finish line. What was so cool was that everybody that was still at the visitors center came out to cheer Nicole in.

Nicole made it up the hill and crossed the finish line a little after 3:30. After all the formalities were done: she had to check in, make sure all of her mandatory gear was there and a quick pat on the head for each of the dogs, I went up and gave her a hug and told her great job!

We lead the team over to the truck and Nicole gave them a quick salmon snack. I looked over the dogs and so did the vet. While they were tired, there were no injuries at all! That is a testament to good dog care out on the trail by Nicole.

We packed up the gear and loaded up the team and headed for home. Nicole grabbed a quick shower while Michele and I put the dogs back at their houses.

By our schedule that we came up before the race, we thought that Nicole would arrive just in time for the banquet. She made it with a couple hours to spare!

The banquet was held at the Willow Community Center at 6 pm after the race. It was a packed house and all the mushers got to sit front and center. The guest speaker was Iditarod veteran, Mike Williams, Sr. He talked about the importance of mushing and preserving our way of life and the junior mushers becoming a mentor for someone else. He also performed the invocation in both his native language and in English. It was a very moving experience.

After dinner, the awards ceremony started. Each musher received a large amount of goods and services donated by local businesses. Nicole received her Red Lantern award and thanked me when she spoke to the crowd. I was so proud of her at that moment I started crying.

2.) Try to push through swamps as fast as possible. The swamps were the worst part for me and the dogs. They got to hot and that’s when a lot of them slowed down and my time increased. (Robert here: The swamps she is talking about are miles and miles of mostly treeless land around Big Lake, Alaska. Even with temperatures in the mid-20s with the sun bright overhead it feels much warmer and it doesn’t take long for the dogs to get too warm.)

3.) Even dogs who are 4th and 5th string leaders have the greatness to be 1st string. Aussie a last choice leader lead the entire race. (Robert here: Aussie was a dog we got from a good friend of ours, Hugh Neff. After hearing about this he asked if he could have him back. Nicole said, “Not!” They both laughed.)

4.) Sometimes keeping your attitude happy and exciting is the best for the dogs. If you think you can’t make it the dogs will feel that energy and they will just quit on you.

Nicole says that she will be back next year to run the Junior Iditarod and remember that thing about mentoring that Mike Williams talked about at the banquet? Well, it is in the works that Nicole will be mentoring a young lady from Canada and they will run the race together next year!

A huge thank you to Nicole’s sponsors and supporters for this race. Not only were your donations much appreciated but your kind words, advice and support that helped make all of this possible: Alaska Chicks, Co. The Upholstery Gallery, Ed and Judy Perry, April Cox, James Wheeler, Bob Morgan, Jeff Rogers, Hugh Neff, David Scheer, our awesome vet Susan Dent and many other family and friends that cheered for Nicole along the trail and to the finish line.

Listen to Nicole’s interview on The Sibe Vibe: