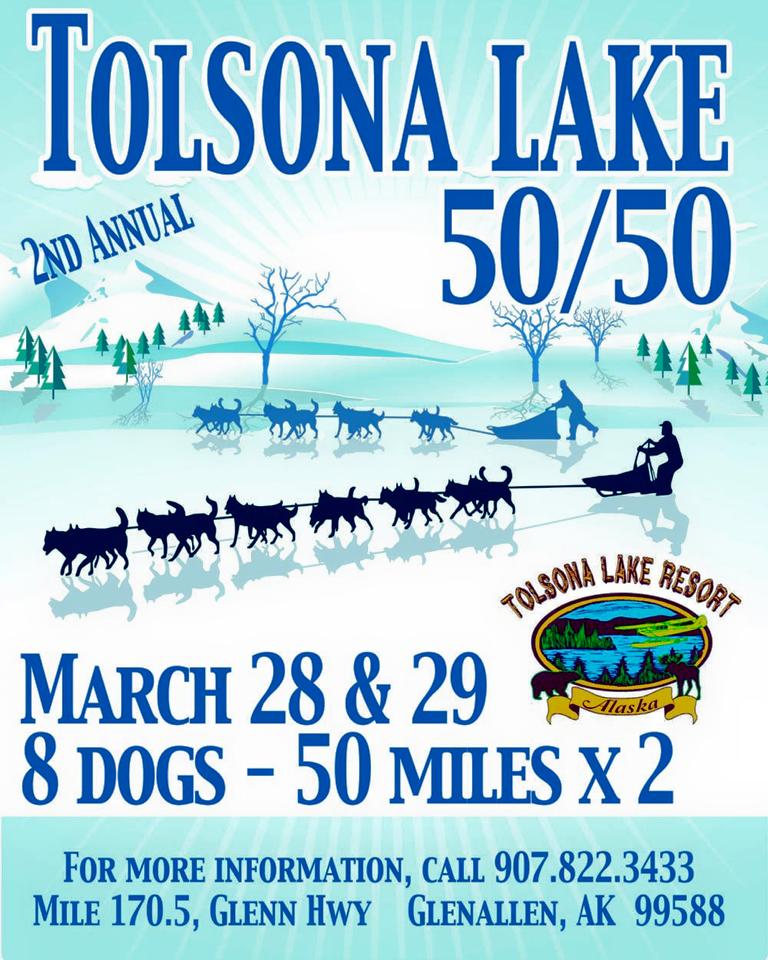 Last year we heard about a race from our friend Dan that we knew this year we would have to put on the schedule to attend. It was the Tolsona 50/50. The Tolsona Lake Resort is on mile 170 of the Glen Highway, a couple hundred miles from home. It is one of the checkpoints on the Copper Basin 300 and from what we heard a great place to run dogs.

We were scheduled to take part in the Willow Relay Race with our teams on this weekend but with the rapidly melting snow in Willow and the un-seasonably warm temperatures we made other plans. The Sunday before the race we decided we would enter two teams.  Robert (me) and Tyler would run together. Tyler hasn’t ran in a race in two years and it would be good to get him back on the runners and spend some time on the trails with me.

We called Crystal at the lodge, made a room reservation and told her we would be there with two teams in tow.

We packed up the truck with gear, sleds, and dogs and hit the road about noon. Michele would have to stay behind to take care of the remaining dogs and she had several dog training client meetings over the weekend. She would be the designated social media liaison during the race.

We made it over the rivers, mountains and through the woods in good time and arrived to the lodge at about 4pm. We checked in, dropped the dogs and fed them dinner before heading over to the lodge eat dinner. We spend the evening talking with Dan and his family and playing pool. Nicole had never played before so we tried our best to teach her the new game. 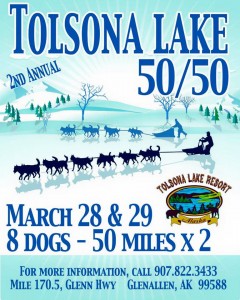 The mushers meeting started at 9am and we drew our starting positions. Tyler would be going out second, behind our friend Karen and I would be going out six minutes later in lucky number 5. Running a small eight dog team it is easy to get things ready to go and it being a shorter race we only had a few pieces of mandatory gear. We were required to pick two of the following: parka, sleeping bag, axe, tree saw, cooker and fuel, or snowshoes. I took the lightest of the group and packed the axe and saw. Same with Tyler.

As the start approached we bootied up a few of the dogs and hooked up Tyler’s team and the countdown begun. With only ten teams entered, we would all be on the trail in short order. Karen pulled her hook and was on her way. Then the fun began!

Tyler pulled his hook and immediately the sled tipped over. The dogs took off like a rocket toward the chute with Tyler being drug down the lake. Several people started to run after him including Nicole with the big Canon camera around her neck. Tyler managed to finally right the sled and was on his way. While it was only a few seconds the whole thing seemed to be going on in slow motion. As he got back on the runners the people watching cheered and Nicole had to run back to help me with my team as I only had six minutes before I was supposed to leave.

Out of breath, Nicole managed to get my team on the line with a minute to spare and I was on the trail on time. 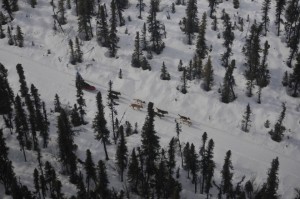 The race would be 50 miles each day with Sunday’s heat running in the reverse direction. The teams would also be starting in reverse order. Meaning the last team to finish on Saturday would be the first team to start on Sunday.

We were on Tolsona Lake for just over a mile before we made a sharp gee (left) turn into the woods and down a hill towards the creek. We were told that the creek had some open water and if we wanted we could make a sharp left turn and go over the bridge but a tree might be in the way.

Our dogs are used to running through a lot of open water during the rainy fall training season so we skipped across the creek soaking my Neo’s (boots) up to my calves. There was a bit of glaciation as we made our way to the very wide trail. The trail for the next 10 miles or so was as big as a two-lane road and is much used by snow machines and freighting gear to the cabins along the lakes.

Teams started passing each other as we made our way down the trail. At mile 8 I saw Tyler pulled over and changing out leaders. I yelled out. “are you okay?” and he said his shoulder was hurting real bad from the fall.

At mile 13 we made a sharp haw (right) turn and the trail crew was there taking pictures and recording times. I was in ninth place at that point with only Tyler behind me. We made our way through a winding wooded trail for several miles before coming to Crosswinds Lake. It is huge! We were on the lake for three or four miles and the trail was getting a little soft in the afternoon sun. As soon as we got off the lake we started up hill. The next twenty or so miles would be up and down, up and down. It as getting really warm and the dogs slowed down to about seven miles per hour. At about mile 30 I switched Shock out with Aussie in lead. I could see Dakota’s bright orange jacket in the distance so I knew I wasn’t too far behind the next team.

After all the hills we made a sharp left turn away from Lake Louise and headed back toward the intersection. As I approached the trail crew still there taking pictures and recording times I asked them how I was doing. They said I was about 30 minutes behind Dakota.

We were back on the wide trail and 13 miles from the finish and Reagan was slowing way down and dipping snow. I stopped the team and loaded her up in the bag on the sled. She didn’t want to go willingly but she finally settled down and we made our way back to the creek. We flew through the water and up the hill toward the finish line. I ski-poled a lot during this race and my arms were burning as we got closer to the truck.

We finished strong and I checked in with Greg, one of the race crew, on how we did. He thought we looked good. About the time Nicole and I were done snacking the dogs and putting them back in the truck Tyler came in with his hand in his pocket supporting his sore shoulder.

Once we got his team snacked and unhooked we could tell he was in a lot of pain. His shoulder was dislocated and I helped him get it back in place using the hood of my truck. He screamed in pain! He then pulled up his sleeve and had a huge ice rash up and down his arm that bled through his sweatshirt. He ran 50 miles with a dislocated shoulder. That’s a musher for ya!

We finished our chores and headed up to the lodge for a most excellent Prime Rib dinner before getting back to the room and retiring for the night.

Tyler decided that he wouldn’t be running the second day with his hurt shoulder and the fact that one of his leaders, Vela, was just too slow in the heat of the day to be effective on the team.

The Race Marshal said we could trade out mushers, and have Nicole run, or let me use some of Tyler’s team on mine. I didn’t think it was right to change the rules up for us so I declined. I decided to start with seven dogs, leaving Reagan off the team. There was no reason to push them too hard as this was mainly just a fun training run for us all.

We started the day off in reverse order. I was heading out first now that Tyler was out of the race. I was followed by Dakota and Karen.

Shortly before the creek Dakota passed me. When we got to the creek it was fully open by then and Dakota had to wade through knee deep water to get his dogs across. As we were waiting for him to do that Karen decided to take the bridge and got her team tangled in the tree. She recovered nicely as I passed her by on the slick icy trail. I asked her if everything was okay and let her pass me a mile or so down trail.

By the time we were at the turn off all the teams had passed me and I was comfortably at the back of the pack. I knew the next 37 miles or so would just be me and my team on the trail and I settled in for the hills. I turned on my iPod and started listening to a mix of Godsmack and Rob Zombie, my trail favorites and slammed at 5-Hour Energy shot.

The hills weren’t nearly as bad on day two as we were going in the opposite direction. It was much more decent than ascent. We were averaging about 9.8 miles per hour when we reached Crosswinds Lake. I stopped the team and let them have a quick five minute break and switched Shock next to Bodhi which was an open spot on the line since I left Raegan at the truck. Now Frosty was in single lead.

We ran across the lake and through the wooded trail to the intersection. I saw the trail crew and asked how I was doing. It was about the same as the day before.

I ski-poled a good portion of the wide trail and was making decent time even though we slowed down to about 8.5 miles per hour.

We crossed the creek which was even deeper now and the sun was still warm. I look off my wind-shirt  and headed toward lake and the finish.

It was almost 3 pm when I finished and we were just in time for the banquet. I rushed to the room, packed up our gear and changed clothes.

As I always do on my race recaps I list what we learned during the event. I do this to hopefully learn from our mistakes and to show our rabid fans things we see and do along the trail. I am a firm believer that we all can learn from each other and this is as good of a way as any to do so.

Lastly I want to thank the folks at the Tolsona Lake Resort and to everyone there that made this possible. Their hospitality was top notch and they are a great place to visit if you get a chance. We will be back next year if the calendar allows. We had a blast–even if I was lead to believe this was a race around a lake! (wink, wink…)