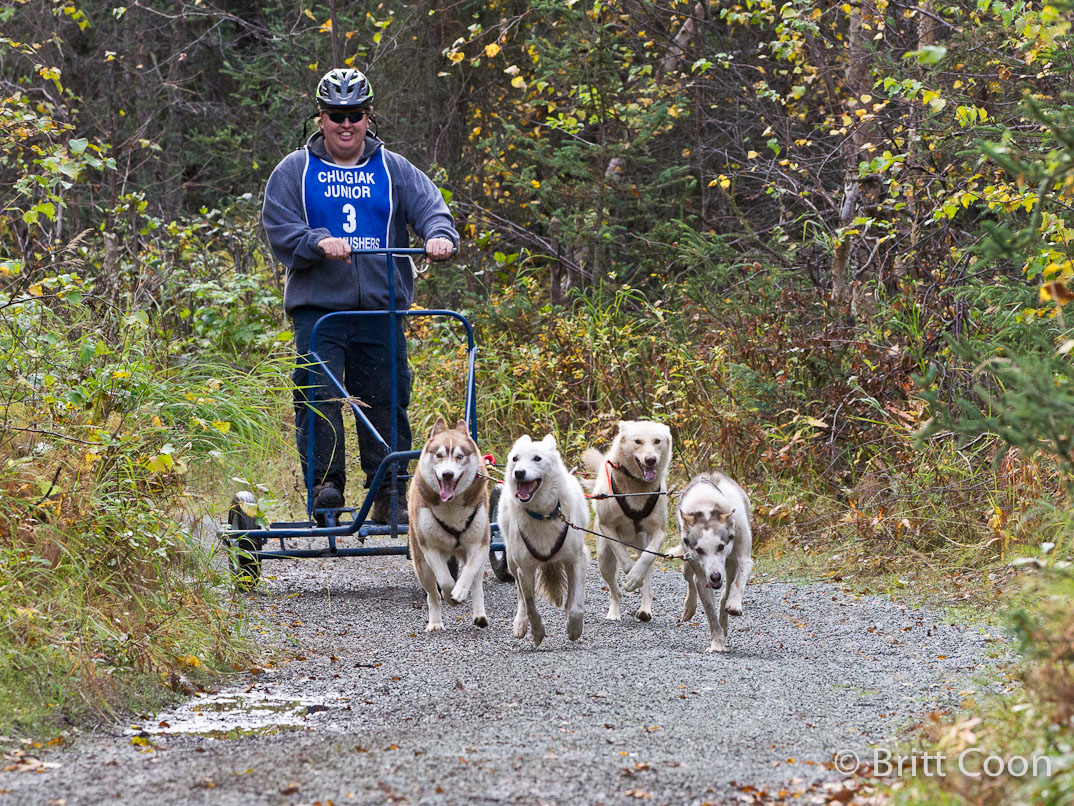 Fall is in the air and the Alaskan mushing scene is doing something it has never done before. It brought dry land racing to the trails of the Chugiak Dog Mushing Association. Earlier this summer I saw a post of the CDMA Facebook page saying they were planning a dry land event in September and I immediately contacted them. I have been using a cart for training sled dogs for more than 15 years. Long before the days of being able to afford an ATV. At one point I was hooking up 12 Siberian Huskies to an old Risdon-style cart that I got from the late Frank Hall.

I met with Deb, the organizer of the event in late July and we talked about my experiences with cart training and racing and we went over ideas on how the club would put on the races.

The event was divided into classes. First the canicross guys and gals went out. These are guys that are running the two mile course with their dog leading out in front. Then the one dog bikejor, two dog bikejor, scooter and then ending the days races with the four dog cart.

I was participating in the two dog bikejor, and the cart races.

I left the house early, at about 7am and with the help of Nicole loaded up the dogs and was on the road toward Eagle River. I arrived at 8am and in time sign up for the days events and help out a little. The musher meeting and bib pickup was at 9:30 and we got our positions.

When I got back to the truck Michele and Nicole were there. They had to make a quick stop at Fred Meyers to pick up a helmet for me as I forgot mine at home. Helmets were required on the cart, bike, and scooter events. Also, our friends, Dale, Lacie and Vanessa were there. Lacie and Vanessa own a young Siberian Husky named Boomer. He came out to learn how to be a sled dog!

As the start time approached for the bikejor, Nicole hooked up my two dogs, Sidney and the young leader, Shock and we headed to the start line. We started off quick and made our way down the muddy trail with the occasional rough spot of deep pea gravel. We finished in what I thought was pretty quick time and I was only passed once by Iditarod veteran Nick Petit on his fat tire bike.

About an half hour later we were hooking up the dogs for the cart races. In this one I had Shock and Sidney again in lead, followed by Burton and Bodhi in wheel. We worked our way to the starting line with the same old cart that I had trained those twelve dogs on before. This time the steering mechanism was bent from hitting boulders and being flung off at high rates of speed from those early days gone by. My cart was by far the heaviest on the trails in this race but it didn’t matter. We rattled along and I occasionally got off the run beside the team with the mud was deep or the pea gravel weighed us down. I was again passed by Nick and finished pretty strong both the dogs and I smiling for the cameras as we came into the finish line.

We had a quick awards ceremony and all of us got something. I got a couple bags of dog treats for my two races.

All in all it was a great day of racing and a fabulous event. The next weekend we would be back at it again for round two.

Day two started much the same except I was bringing along a few more dogs. I was the first musher to arrive at the parking lot and sat for a few minutes before others started to arrive. It was indeed much colder than the week before and there was frost on the trucks and on the starting chutes. It was going to be a great day of racing!

Today we would be entering three teams in the 2 dog bikejor, as Dale and Lacie would also be racing under the Team Ineka banner. As you may recall, Dale mushed with us last year and he has one of our older dogs, Pearl. Lacie and her dog Boomer are new to this whole sled dog thing but they would quickly learn today just how fun it is!

We had our meetings and grabbed our bibs and waited for our race to start. Lacie was scheduled to go out 3rd, Dale 4th and me in 9th position. With only a minute between starts our handlers for the day, Michele, Nicole and Vanessa would have to boogie to get us all out on the trail. Lacie was running Denali and Boomer. Denali, one of our oldest leaders would teach a thing or two to the young pup, Boomer. They started down the trail quick and Lacie was pedaling hard as she rounded the corner and out of sight.

Dale was up next. He had the ever-excited duo of Cession and TyTy. Cession is an up-and-coming leader and TyTy runs in lead all the time with Nicole on her team. Dale admittedly was a little nervous with these two high energy pooches out front. His only practice run was a quick circle around the parking lot minutes before the race.

I rounded out the field of nine as I made my way to the starting line. I had Sidney and Shock again. Remember last week when I told you that we had to wear helmets? Well, we only had two bicycle helmets at home so I had to improvise.

As I headed to the starting line I put on my Viking helmet that sure was getting a lot of side glances, pictures, and comments. I even made the 10pm news on channel 2! I headed down the trail and had a great run. My two dogs knew by now we were there to race. The trail was firm as all the mud had dried up from the week before.

I ended up finishing in 5th place and Lacie and Dale in 8th and 9th respectively.

As it approached time to hook up the four dogs for the cart race I decided I would wear a bicycle helmet because I thought I heard I was disqualified from the biker for my outlandish viking helmet. I had Sid and Shock in lead followed by two big brutes, Ragnar (hence the viking theme) and Trapper. Ragnar is new to my team this year as he is a bit “wild” in harness. This year he will be on my main team. Trapper has been with me since the beginning when he came to us a couple summers ago as part of the Kasilof Crew. He has raced with me in races the last two seasons including the Tustumena and the Knik 200.

We scooted down the trail on the same heavy cart but we had much more power with the two big boys in the back. We ended up finishing 8th.

We had our awards ceremony and all three of us collected our winning dog treats. Lacie and Dale were all smiles and really enjoyed their time on the trails.

We were told that next year the club hopes to have a dry-land race series in September/October. We will surely be there!

This event, both weekends was an absolute blast! We had a great time. Met a lot of great people and introduced two new mushers to the sport of dry land racing. That’s what its all about for us.

I want to thank the volunteers and the Chugiak Dog Mushers Association for putting on an awesome event. It will be something that we will remember for a long time. I am glad someone had the courage to bring this to Alaska. Any mushing event that can bring people and dogs together is what this sport needs in order to continue to grown.

Thanks again from all of us at Team Ineka. We will see you next year!