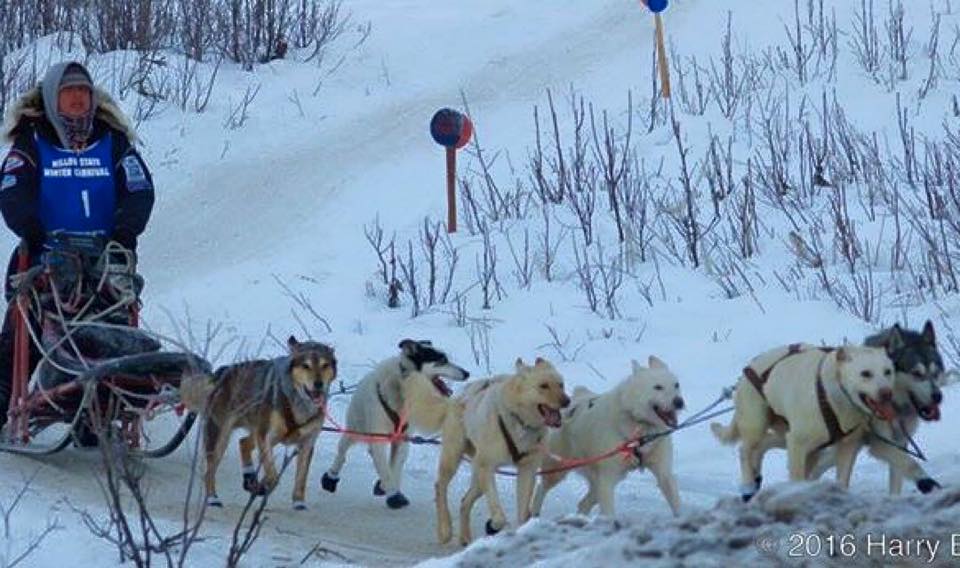 Our first race of the year was the Earl Norris Memorial Sled Dog Race that is part of the Willow Winter Carnival. It is a 30/30 race meaning you run thirty miles one day and then do the same trail the next day.

We decided to enter two eight dog teams with me (Robert) and Lacie running in the event. It would be Lacie’s first race. She has been training with us all winter and has hopes of running a team in a few more shorter races this season.

Sign-ups were held after the carnival kick-off dinner at 6:30 with the starting order draw to follow. I would be going out 10th and Lacie would be going out 13th. There were 15 teams entered. We headed home, picked the teams and loaded up all the gear.

We got an early start and headed over to Willow Lake with 16 dogs in tow. The race called for 10 dog teams so we already knew we would be a bit slower than most of the other teams along with them being sprint teams as well.

We ended up parking together as a few mushers didn’t show and soon realized that starting would be a little chaotic. All the teams were hooked up and yelling to go by 10:00. I should be going out at 10:20 but several teams had to be shuffled for the no-shows. Very quickly a couple mushers went the wrong way across the lake and one musher lost his team. Two snow-machiners blasted off like rockets across the lake to catch the speedy, driverless team. Our friend, Kari got turned around a bit on the lake too but managed to quickly find the trail.

As my time to leave was coming up the timers skipped over me and went to bib 11. It caused a bit of chaos because we were supposed to have two spots between me and Lacie. By the time I was off, Michele and Vanessa were hurriedly trying to get her team on the line in less than two minutes and she incurred a penalty.

My dogs found the trail across the lake quickly and soon we were on our way. The first section of trails were on again, off again on the lakes before our first road crossing and then into the trees. I planned on keeping my dogs under 11 miles per hour this soon in the race but they wanted to go. By the time we made it to the long, wide road I started having problems with my leaders. Sidney is getting older and she is slowing down so I stopped and quickly changed out her with Mila in lead. This was her first time as a lead dog in a race and she wasn’t sure what she was supposed to do. We were quickly passed by a few speedy teams on the road before we got to the Lucky Shot Trail. The trails were beautiful! The snow was just coming up and a fog was lifting. We were making our way around Almond Lake on our way to the swamp and suddenly a long patch of ice appeared. Almost at once I saw both my wheel dogs, Bodhi and Raegan slip and try to catch their footing.

Shortly after we arrived at the Willow Swamp Loop I knew something was wrong. Both Bodhi and Raegan were hobbling and I stopped and set my hook. It looked like the little slip on the ice took them both out and suddenly I had two dog in my sled bag with more than half of the race to go. Bodhi settled in soon in his comfortable spot but Raegan didn’t want any part of it. She was telling me about it too in her husky whine.

I now had a six dog team and pretty quickly Lacie caught up with me. We spent the rest of the Swamp Loop in tandem. Her team not wanting to pass mine.

After crossing Vera Lake and the road crossing near Eaglequest Lodge, Mila had enough. I made a decision to put Burton in lead. This was his first time too. We made our way back to the Lucky Shot and the road. It was now a long, slow up hill for almost two miles. Just as we entered the trees Bodhi was ready to get back on the line. It didn’t last long as he knew very quickly his shoulder was hurt and quickly stopped after we crossed the final road crossing just two miles from the finish. A couple volunteers asked if I needed assistance and said they could take him but I would probably be disqualified for outside assistance. I politely declined and loaded him back in the sled bag with Raegan. 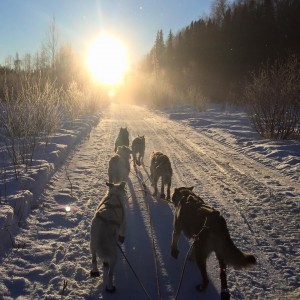 I hadn’t seen Lacie and her team since the bottom of the Lucky Shot Trail and I hoped she would be okay.

There was a four hour cut off time limit and I was cutting it close with all the problems I had on the trail. I pulled into the finish with a time of 3:45. Lacie didn’t make the cut off and would not be allowed to race the next day.

To put things into perspective, I ran this race last year with two days of running at three hours a piece. Today I was 45 minutes slower and over and hour and a half slower than the first place finisher. 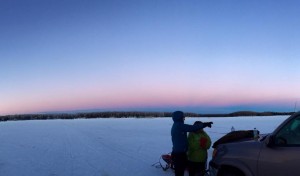 We unhooked the team and gave them all a frozen chicken thigh while we waited for Lacie to come in. After the race we headed inside to grab lunch and head home.

Since I was the last to finish on Saturday I was the first team to go out today. I didn’t mind as I knew I would be passed quickly by the speedier teams coming up behind me. I started with Sidney again in lead and this time she and Frosty did veer a little to the left off the trail. I quickly called out, ‘Gee!” and got them back on track. By the time we were in the trees after the first road crossing I changed out Sid with Burton.

The run today was much faster even though I only had a six dog team. We decided to leave Bodhi and Raegan at home and run with the smaller team. I knew at this point I would be in last place but still “in the money” so to speak as long as I completed the race under the time cut off. That was no problem.

I did end up coming in last place and finished in ninth place, the same place as last year. The difference was last year there were a few teams that finished after me. This year they were either scratches, no-shows, or DQ’s.

I collected a small check that covered my entry fees and we headed home.

We knew going in that training was not up to par to what we expect and what we usually do so we knew we would do poorly. It was nothing put lack quality training that caused us to come in last and required Lacie to not finish under the time limit. My dogs did great with what we had to work with and did very well carrying two dogs in the sled bag that added at least a hundred pounds or more to the sled. 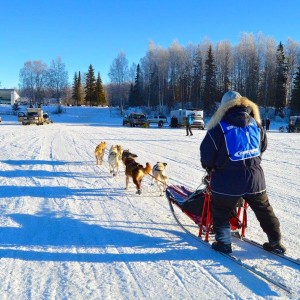 I was a little worried about being able to finish with just a six dog team and lack of strong leaders. I know that a lead dog will make or break a team and I saw that Sidney just isn’t able to run as fast as the others at the excited start of a race anymore. She always does just fine in team and her gait is impeccable.

This is always a fun race and the trails are superbly groomed. The Willow Trails Committee puts in so many hours and their hard work is second to none. I always enjoy running on trails close to home and being a part of the Willow Winter Carnival is always an added bonus. We will be back every year as long as it fits in our schedule. I am always honored to support local events and take part in a race that pays respect to a mushing legend, Earl Norris.