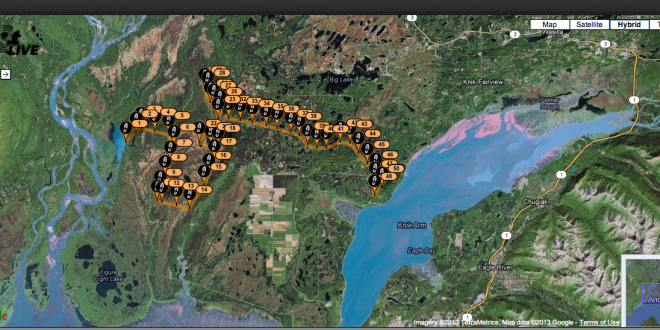 It was Friday night about 6pm and Michele calls me on my iPhone. She is at Underdog Feed and just spoke to Lisbet Norris.

“Well it’s tomorrow and I think it would be FUN if you ran it!”, says Michele. You see how I underlined fun? We will get back to that in a little while.

So, with less than 12 hours notice we prepped to run the race. I had already planned a 30 mile training run that night so after Tyler and I got back with the teams we started packing.

We quickly realized right before I headed out on the training run that we had no trail snacks for the dogs during the race. We called Kathy Smith of Mushers Feed and Supply. She was in Nome. She is Lance and Jason Mackey’s mom. If you are reading this and you don’t know who they are, well…

So Michele ran to 3-Bears and Tyler and I hit the trail.

30 miles and a couple hours later we headed back up to the house to start packing for the race. On the kitchen island were four 5-hour energy’s (a musher’s little secret) and a bag of beef jerky. My preferred trail snack, and two boxes of hamburger patties. You know, the ones like you ate in school.

I guess they will do.

We got everything packed. Since this was just a 150 mile run with only one checkpoint and no food drops I will have to carry everything in my sled.

We arrived at the Tug Bar on KGB road at about 10:30. For those of you know don’t know, the Tug Bar has been the host of several races over the years and is rich in mushing history. It has been host to the Klondike 300/Willow-Tug 300/Northern Lights 300 (yes all the same race with different names), as well as the Tug Bar 150 for at least 15 years. Some of the past winners are named Buser, Smyth, Reddington and Burmeister.

We got our vet checks out of the way and headed inside for the musher meeting.

The meeting last for almost an hour. Most of it was going over crudely drawn trail maps on pieces of paper.

We were supposed to head out at 1pm but changed it to two so people could have time to broth their dogs.

There were nine mushers and I drew number 3. I would be heading out at 2:09.

Right before we harnessed up, Bud Smyth, I am sure you know that name too– Ramey Smyth’s dad and legendary musher that ran some of the first Iditarods– spoke to me again about the trail. He was listed as the “technical advisor”. I said, I am sure I will be fine I will just follow the trail markers.

We pulled up to the starting line with Tyler and Nicole as my handlers across a sheet of ice in the parking lot. As the countdown ensued I was ready!

In just the first twenty yards of the race I was in trouble. We had to cross KGB road and up an embankment. My brake caught an ice berm and the sled tipped over. Here I was not 45 seconds into the race and I crash. I made it up right with the help of a couple spectators and headed down the trail. I was not the only one that crashed at the start mind you.

The first 19 miles were rolling hills through the woods passing over several road crossings and driveways. Then we made it to 9-mile hill! 9 mile hill rivals any of the hills we have in the Mat-Su Valley. It was huge and steep. That early into a run the dogs are still eager to go at full speed and I had to stand on the brake with both feet just to slow them down as we headed toward the base.

Throughout the afternoon we mushed on through some of the most beautiful scenery I have ever seen. It was a beautiful day with the sun shining. It was a little too warm to be mushing dogs, in my opinion, but we were going to take our time. I had planned on a 10 hour run to the checkpoint on the Yentna River, stopping to snack about every three hours.

As night fell we crossed over the Big Su River and headed onto Alexander Creek Loop. This is part of the original Iditarod trail and is currently used for many races including the Junior Iditarod.

About halfway into our 78 miles I saw Lisbet resting with her dogs on the trail. We said our hello’s and I mushed on.

We passed Eaglesong Lodge and started seeing signs for moose in the area. I didnt see any moose but there were plenty of moose holes and a short time later Denali, my ever trusting leader, stepped in one and started limping. Great!

I stopped the sled and ran to the front of the team. He didn’t seem injured but I took him off the line and put him in the bag. I put Sidney up with Cassie and away we went.

As we hit the Yentna River we were about 10 miles to the checkpoint. The Northern Lights were out and absolutely breathtaking. The river is huge. At least a half mile or more across and there are hundreds of dog teams and snow machine trails criss-crossing it. I did not see any of the T-120 markers and allowed Sidney to work her way down river following whatever scent she could.

The rivers here are our super-highways in the winter. Many dog teams and at least five or six races use the river to train and run on. Hundreds of people live on the rivers and snow machines and boats are their only way to get to their homes. I have seen many times people hauling big screen TVs on their snow machines down river, along with building supplies, and bulk purchases from Costco.

I arrived at the checkpoint on the river at 12:05 am. 9 hours 56 minutes after I started the race. Not bad. I am right on schedule!

I did my chores and laid my sleeping bag out on a bed of straw next to Bodhi and Cassie, Vela and Sidney. I could hardly fall asleep with the Northern Lights dancing above me in a spectacular display of greens and red.

By 4:30 the first teams in where preparing to leave. I still had a couple hours so I headed into camp to warm up and grab a bite to eat. The race put up a very nice checkpoint with food and a couple places for mushers to sleep. I have always preferred to sleep with the dogs, even though I was sleeping in the middle of a river that night I could not ask for a better way to spend the evening.

30 minutes before I was to leave I gave each dog a rub down and inspected their feet. I was still a little concerned with Denali even though he did finish the run into the checkpoint last night. I had him in team just ahead of the wheel dogs so could watch him. Instead of risking injury I dropped him at the checkpoint and he would get a ride back to the finish in style.

I was allowed to leave at 8:05. I left at 8:20 down the river. Since it was just after sunrise I could see the trail markers now as we travelled the 7 miles down the Yentna before we took off towards Flat Horn Lake.

As 10:30 approached we were in the middle of a swamp and it started getting very warm with little in the way of shade. My dogs slowed way down and I just took it easy. They were dipping a lot of snow and I could tell that the heat was bothering them. I never want to put my dogs in jeopardy so I vowed to stop often and just enjoy the time out here on the trail with them.

Throughout the day the view was awesome! Sleeping Lady (Mount Susitna) was to my right the entire time and she is massive! We circled through the swaps a couple times and about 1:30 I came upon Lisbet and Monica Zappa camped out with their dogs. Monica had gotten lost early in the morning on the river and had run all the way back to Eaglesong before turning around.

I snacked my dogs and talked with the two ladies about mushing and dogs (of course) and then hit the trail. My dogs didnt think it was right to leave their new friends behind so we had a frustrating 15 or 20 minutes with them looking back. The ladies caught up to me and I let them pass.

The three of us travelled more or less together for about two hours until the race marshall approached us on a snow machine with a scratched musher and his sled. He told us we were going the wrong way and we needed to turn around.

We were only 19 miles from the finish, near the Nome sign.

Those 19 miles are the toughest section of the trail. Remember I told you earlier about 9 mile hill? It was steeper going back and this time the dogs were tired and hot so I had to push the sled up all of them.

As I turned the last corner and onto KGB road I saw Nicole run across the road, presumably to tell them I was coming in. As I approached the intersection, where I wiped out the day before, my son and daughter were the first to greet me. It was a great feeling. I crossed the finish line and flashed my wife a smile. I got in at 6:41. 10 hours 21 minutes and that included me getting lost. Not bad.

I pulled up to the truck and spoke to J.P. Norris for a few minutes as I stood on the brake while Nicole and Tyler un-hooked the dogs. He said he was following my progress on my Spot Tracker. Very cool.

We fed the dogs, loaded up the gear and headed inside the Tug Bar for the banquet. They had every type of food you could imagine including corned beef and cabbage. It was St. Patricks Day after all.

I received the Red Lantern. No worries. It was a great training run for us and I got my first Iditarod qualifier under my belt, not to mention just 48 hours before we knew nothing of it.

First, I tried out a lot of the team in lead. They all did pretty well. I learned during the Tustumena experience I can’t count on one leader to pull me into the finish line. On this race I had Cassie, Sidney, Vela, Denali, Rasp and Aussie all in lead at one point or another.

Third, have fun! That is what Michele said to me before I left. I did. Yes, it was too hot. Yes, there weren’t enough trail markers but you know what, I did have fun. This is why I mush dogs. Just the sheer enjoyment of being out on the trail and spending time together is all worth it. Better yet, having your family greet you at the finish line and to see them with a smile on their face when their dad crosses the finsih line is priceless.

Sure it was only 150 miles. A far cry from the Iditarod. But each mile I run with those dogs is a treasure I would not give up for anything in the world. It is why we moved to Alaska. For moments just like this. I am in no hurry to run the BIG race yet. Heck, look at guys like Jim Lanier. He is running it in his 70s. I still have 30 years!