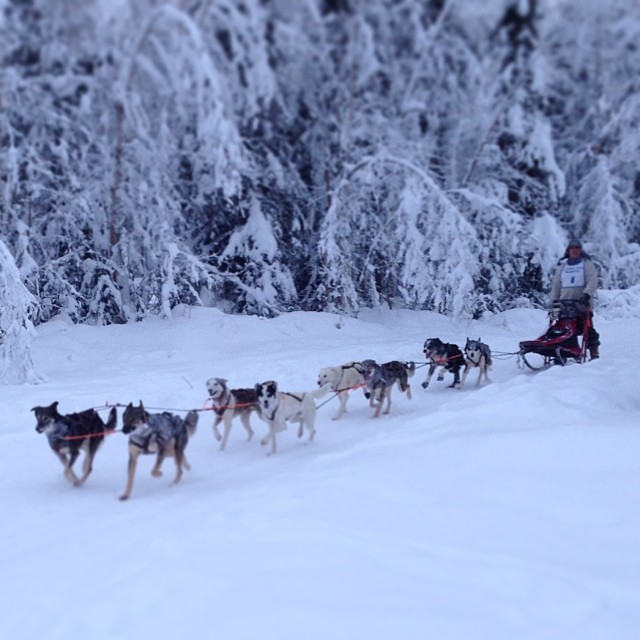 This past weekend I participated in the Eagle River Classic sprint races put on by The Chugiak Dog Mushers Association. It was my first sprint race in more than 14 years!

After last weekend’s Knik 200 I needed to get out and run dogs and just have fun.

Michele, Nicole and I, woke up early Saturday morning, 5;45, did the kennel chores and loaded up the team. Being a sprint race we needed very little, almost none, in the way of gear. We grabbed a snack for the team, mixed up a meal for them after the first heat in the cooler, some booties and the sled.

We arrived early at the Chugiak Dog Mushers Association. After parking the truck we headed over to their beautiful clubhouse, paid the entry fee (over a hundred bucks) and waited for the other teams to start to arrive.

By 9:45 the driver’s meeting was underway. I drew bib 2 for day 1 in the eight dog class. That means I would be going out second in a field of 8.

The eight dog class wasn’t scheduled to run until 12:50 so we had plenty of time on our hands to watch the action. The skijor class went out first, then a couple novice races and then the 4-dog and 6-dog classes.

Sprint racing is MUCH different than distance. Everything is hurry up and wait and you can sense the tension in the air as the mushers prepare to run. All of the sleds are aerodynamic, and are slick rocket-shaped designs. The newest models use skis for runners. These multi-thousand dollar sleds are designed to shave off seconds of a run time.

The dogs are much different as well. Most teams are running tall, thin and sleek hound-crosses. I believe our team was the smallest (in size) of the bunch. There were several husky looking dogs but not many in the 30 or so teams lined up in the parking lot.

As we got closer and closer to race time we started in on our pre-race chores. Dropping the dogs, booties for those who needed them, harnesses and getting the sled ready. We were all parked side-by-side and each of us had a pole to use as a tie out. At 12:40 we were ready to go.

Each team “pulls the hook” from their pole near the truck and heads to the starting chute. I had Vela-TyYy in lead, Gabby-Shock, Cession, Sidney, Dandy and Spencer in wheel. Nicole and Michele got me up to the start line and the countdown began.

At exactly 12:51 I was on the trail! I had to remind myself not to use the brake going out of the chute. After the first turn I could quickly see I was on the nicest trail of my life. It was a beautifully groomed trail about eight feet wide. It ran through the trees, up and down a few hills, through a tunnel, and even a bit of overflow that they made a big deal out of in the driver’s meeting. It was just a bunch of ice, something we see on our trails every day.

Within a few minutes teams started passing me. All the passes were uneventful with no tangles. Those super fast hound dogs blew past me like I was standing still.

But standing still we were not. My team were running. FAST! Those little dogs have never run that fast in their lives probably. We had no weight in the sled. No gear, nothing to weigh them down. We were even running too fast for Vela who was in lead and I had to slow the team down several times to keep the gang line tight.

We finished the eight mile course in just over 37 minutes. Almost 13 miles per hour! We are used to going 8! We were in last place but who cares.

We got back to the truck, feed the dogs and let them cool down a bit before we put them back in the truck. By 2:30 we were back on the road.

We had dinner in Eagle River and where home by 6.

The nicest thing about sprint racing is you get to sleep in a bed at night. Most of the time your own bed.

Sunday morning we were back at it and on the road and back in Chugiak by 9:30. We had a quick drivers meeting, bib draw and trail report. I was going out 8th because of my last place finish the day before. Thats okay. No passing and all chasing!

We left the chute at 12:04 and I made it back in 20 seconds faster than the day before! What? We went even faster? 20 seconds, but still…

We were done and loaded up by 2:00 and hung out a while in the clubhouse before heading home.

We were home in time to watch the second half of the Bronco’s game!

2. Several of our dogs got some great experience around all the chaos of racing.

3. The trails were beautiful. It was like running on a highway.

4. While all the mushers were intense, everybody was very nice. I think we even made a couple new friends.

5. Our dogs did great! Even though we were slow by the rest of the competitors standards, each one of them showed me that they could run fast and they all came back happy and wagging tails.

The Chugiak Dog Mushers are great and I can not thank them enough. They put on a great race and we were honored to be there. Even though it had been well over a decade since we have done a sprint race, the weekend brought back a flood of memories.

What a great weekend. Hope to see you down the trail…